…or acqui-hires Luvocracy.  According to TechCrunch, @WalmartLabs acquired a solid roster of talented peeps with pedigrees including Yahoo, Blurb, and eBay.  They reportedly plan to use this talent to improve their own site’s product discovery, building off of Luvocracy’s past as a sort of cross between social recommendations, wish lists, and Pinterest. Sort of like Wanelo or Svpply.

Walmart has been on the prowl lately, with this acquisition marking the R&D arm’s14th startup purchase. Recently, they’ve been clearly focused on ecommerce and mobile innovation.  Still fresh is the June  acquisition of fashion commerce and discovery app Stylr.

I don’t hate it as a strategy. In fact, there was just a Mobile Marketer article published on this topic exactly. Big brands are putting their financial resources to good use by acquiring top talent who have innovative ideas and technical skills.  It has become increasingly apparent that the expertise needed is in mobile and social, two areas where perhaps traditional retailers are struggling to keep up. The traditional retailers may not have the culture, perks, location, or thought leadership to attract top talent in these areas but are able to adapt in the shorter term via acquisitions.

It will be interesting to see how smaller brands or brands with fewer resources work around and compete with the likes of WalmartLabs and Nordstrom, which I wrote about recently.

One thing is for sure: mobile and social aren’t going anywhere. I think this was a solid acquisition.

Here is some coverage so far:

Wal-Mart buys another tech start-up, Luvocracy – only to shut it down (WSJ MarketWatch)

Industry brief  for the week of July 20th – July 26th 2014. All sources can be found in the hyperlink after the headline:

In a mobile innovation and omni-channel play, Target introduced an image recognition app called In a Snap just in time for Back to School. The app is much like those we’ve seen before (as stand-alone  apps or as part of an of existing app) from brands like eBay Fashoin and startups like Toronto-based Slyce or London-based ASAP54.

The app allows users to snap a photo from Target’s ads in magazines like Real Simple or in their upcoming catalog.  Based on the image, the app then leads users to the website which allows them to add to their cart or try out Target’s new click and collect service.

The app comes just in time to compete with Amazon’s FireFly, an image recognition service that comes on its new Fire Phone. The visual search service can recognize over 100 million items from QR codes, bar codes, images and even song clips.

While Target’s app may be less “advanced,” it is still both buzz-worthy and useful, two important characteristics of a new app. The company reportedly built the app in 6-8 weeks in its Rapid Accelerated Development group and is currently collecting customer feedback and working on fixes.

My take: It’s awesome that Target is experimenting with mobile technology but it is even more awesome that they are investing in teams that can quickly develop customer-facing features. The continuous deliver, test and iterate model can make a huge impact at companies that are able to dedicate the resources (financial and human). By rapidly delivering this feature to customers, Target will have the quick feedback they need to improve the product and deliver even more value to their customers.  I don’t think visual search is going anywhere and anything to innovate print is pretty cool. 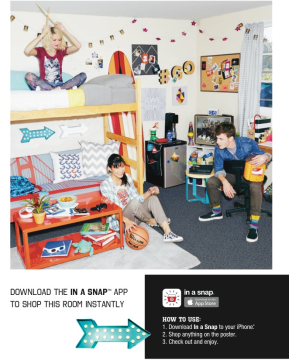 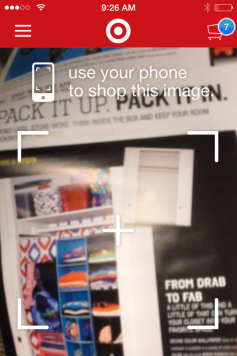 Images from All Bullseye View

More coverage around the web:

The Target ‘In a Snap’ App Makes Shopping, Well, a Snap (Bustle)

Banana Republic is getting buzz this week for its latest look called the ‘Startup Guy.’  I imagine there was a meeting in which they decided that a strategic target market for this collection would be the typical ‘Startup Guy’ and it just sort of stuck.  I know that happens a lot with an internal reference to “the girl” or ” the guy,” but most companies keep those sorts of descriptions within the walls of the office and then try to express it through styling, marketing, photos, etc.  Banana, however, will be very explicit, with head-to-toe looks for the Corporate, Creative, and Startup Guy. So get out there, cuff your pants, un-tuck half of your shirt, roll up your sleeves just a little and get cracking on that start up (that I’ll hopefully be writing about later).

Hey, maybe there’s something to be said about being direct with dudes. 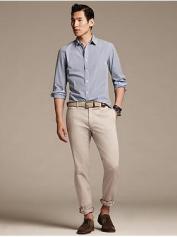 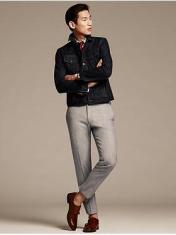 Some coverage around the web:

Industry brief  for the week of July 13th – July 19th 2014. All sources can be found in the hyperlink after the headline:

Rent the Runway made big news last week with the beta launch of a new subscription service for accessories.  With Rent the Runway Unlimited, customers pay $75 per month to rent everything from handbags, to sunglasses, to jewelry.  The customer gets up to three accessories at a time and can keep them as long as they want, until they are ready to trade in for the other items on their list.

The new section of the website currently features a metallic silver Barbara Bui leather jacket that retails for over $2,300, a nearly $600 Elizabeth and James bag, and $675 Balenciaga sunglasses.

Co-founder and CEO of Rent the Runway, Jennifer Hyman, told WWD that they are aiming to “attack” Zara and H&M, which appeal to the mass market with what she calls fast fashion disposable “junk food.”  With Unlimited, customers can enjoy the thrill and high of wearing of on-trend luxury products without breaking the bank.  A nice proposition for those weary of spending big bucks on a trend that may not last through next season.

My take: Rent the Runway has been doing a great job of distorting their category. Temporary ownership of luxury goods is not a ground-breaking idea but they’ve been able to successfully increase share of wallet from millions of women.  They’ve gone the same way as other successful tech start-ups such as Bonobos, BirchBox and Warby Parker by opening brick and mortar retail stores and now, they seek to capitalize on the subscription business model.  Next up, they are planning a brand face-lift that will include more editorial content (Net-a-porter anyone?) and a further push to sell their products permanently via a Try to Buy program. Though they haven’t said so, I imagine international is on their road map as well as a more digitally innovative in-store experience.

Way to use your VC funding well, ladies.

Check out some coverage of the new service around the web:

Rent the Runway, Spotify and Amazon Web Services: Why Own When You Can Share? (PC Mag)

They may buy Trunk Club.

It was reported this week that Nordstrom may be in talks to purchase Trunk Club, the Chicago-based men’s style start-up.  The service handpicks high-end clothing for its customers after a “getting to know you” session with a stylist.

Nordstrom is known for investing in fashion and tech start-ups.  In 2013, Nordstrom invested in gift-giving service Wantful which has since ceased operations after funding was suddenly pulled.   Nordstrom also invested in Bonobos (which recently secured $55M in new funding) and fully acquired flash sales site HauteLook.

Nordstrom seems to be committed to investing in cool, fashion x tech start-ups.  Note their apparent benefits of partnering with Forerunner Ventures, the San Francisco VC firm that invests in everything you wish you did (re: BirchBox, Serena & Lily, Warby Parker).  In addition to their well-known Bonobos relationship, Nordstrom was the first retailer to bring Wanelo into the physical store experience.

It behooves all parties involved: major retailer gets buzz and access to innovation, start-up gets support from established retailer and investment fund benefits financially from this cyclical success.

This news couldn’t be more timely for my first “real” post on the new blog. Tory Burch’s new jewelry line for FitBit has hit the press. Talk about the intersection between fashion and tech, right? I need to get this bracelet ASAP. 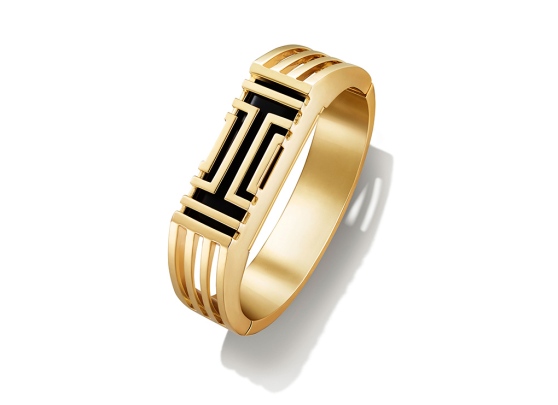 Image from The Verge

Checkout some of today’s coverage from around the web:

Hide your Fitbit in this new Tory Burch jewelry (The Verge)

Industry brief  for the week of July 6th – July 12th 2014. All sources can be found in the hyperlink after the headline: